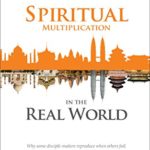 In the second part of the book Spiritual Multiplication in the Real World: Why Some Disciple-makers Reproduce When Others Fail, McNabb covers the essential elements of a successful disciple-making team:

1. The leader champions the vision of Spiritual Multiplication constantly.

McNabb says, “51% of the disciple-makers who scored as effective in our study reported that their leader championed the vision on a weekly basis.” He then goes on to detail specifically how Jesus championed that value repeatedly with his disciples.

2. The Leader Models the Vision of Spiritual Multiplication.

“Our survey asked people if their leaders modeled spiritual multiplication. Many people answered “Don’t know” on this question, which was essentially saying, “Maybe my leader did, but I didn’t see it.” 83% of these people were non-effective. In contrast, 84 percent of effective disciple-makers said yes, they did see their leaders model spiritual multiplication. This set off our software’s alarm bells, indicating we had found something significant.”

4. Members of the church or small group engage in giving and receiving regular coaching.

McNabb starts by reviewing stories of Jesus coaching the disciples in real world situation. Then he says,

5. The church’s or Ministry’s small groups function as disciple-making teams.

“Highly effective disciple-makers average twice as much time discussing evangelism, praying for the lost, and actually doing evangelism together with others in their small group as non-effective disciple-makers. Effective disciple-makers fall somewhere between the two. The relationship here is clear: increased time doing evangelistic activities together as a team increases effectiveness. Most groups that function well as a disciple-making team define multiplication as their reason for existence. What we call a group is important because its name implies its reason for existence. Bible studies, fellowships, and prayer groups don’t usually multiply. “Cells” multiply. “Evangelism Teams” multiply. “Disciple-Making Teams” multiply. Many churches start small groups for the purpose of assimilation and care. The best groups I have ever seen at assimilation and care, though, are those that form for the purpose of equipping and mobilizing their members. The church is supposed to build laborers, not hospitals.“

“Michael Stewart, Pastor of Missional Community at The Austin Stone Community Church, conveys the importance of pursuing mission within the context of community: “This wonderful, beautiful community we find in Acts 2 was a direct result of pursuing Jesus and his mission. At Austin Stone, we have realized that when you aim for Acts 2 community, you will get neither community nor mission. But if you aim to pursue Jesus and his mission, you’ll get both mission and community.”

7. Those seeking to Multiply are Characterized by abundant prayer.

“When David Garrison studied fast growing church planting movements, which grow by training laypeople to multiply, he found that abundant prayer was not just a common element, it was universal in every movement. 22 I was visiting recently with a missionary trainer who spoke of the prayer habits he had witnessed in several church planting movements. He said, “These guys are spending crazy amounts of time in prayer every day.”

Next week will will look at Part 3 of the book, Effective Disciple-making Practices.